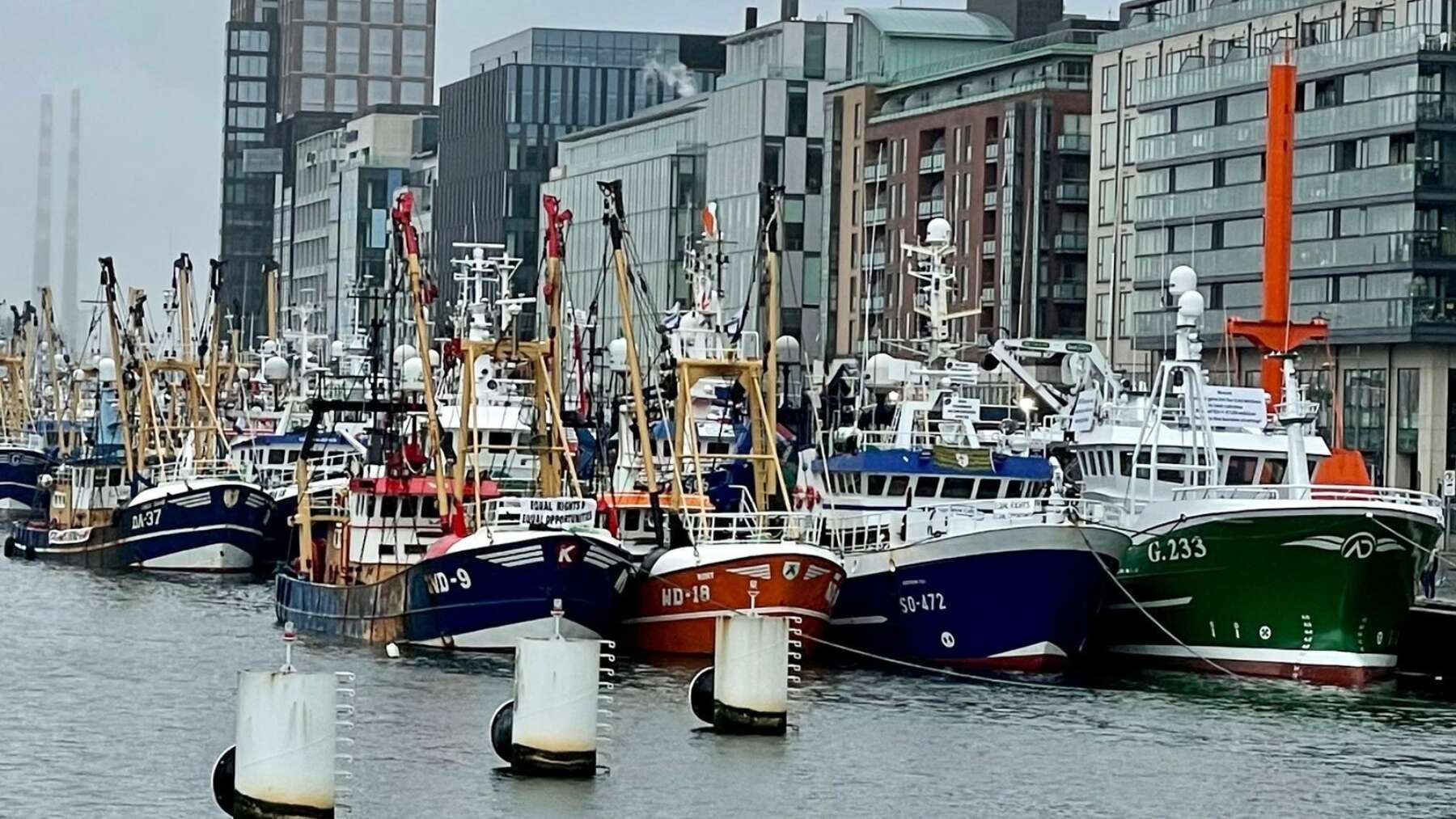 You may have noticed in the news the recent protests in Dublin and Cork by fishermen. Last month a flotilla of around 60 fishing boats from around Ireland travelled up the River Lee to deliver a letter of demands to Taoiseach Micheál Martin’s Cork office. While last week a similar sized flotilla took their protest to John Rodgersons Quay on the River Liffey. The fishermen and women are trying to get the Government to act as they face big cuts caused by Brexit and EU quotas and controls that have heavily impacted the industry. We take a closer look at the reason behind these protests and how it’s affecting the fishing industry.

It was estimated that 500-600 fishermen and women, and their supporters, marched to the makeshift Dáil at the National Convention Centre to hand over a list of demands to Taoiseach Micheál Martin.

The fishermen and women are hoping to get the Government to act as they face big cuts caused by Brexit and EU quotas and controls that have heavily impacted the industry.

They estimate that Brexit, for example, is costing individual fishermen and women between €5,000 and €20,000 in lost income because of a quota system that operates, they say, against the interests of the Irish fishing industry.

The Brexit trade deal has also raised a couple of specific issues for Irish fishermen:

Fishermen have fewer waters to fish in. 64% of Ireland’s largest fishery, mackerel, and 43% of our second biggest fishery, prawns, is caught in UK waters.

With the UK off limits, they are concerned that EU vessels, such as Spanish, French, and Dutch fleets, will start to appear in Irish waters to compete.

The smaller boats are facing challenges as they are increasingly becoming under threat from bigger vessels from other countries and corporations as well as the new rules and standards needed for environmental sustainability.

Following the protests, The Minister for Agriculture, Food and the Marine Charlie McConalogue met with industry reps and said that talks were “constructive” and called for “continued engagement with the industry”. He is also said to commit to visiting ports and harbours and meet with fishers and coastal communities on a tour of Ireland over the coming months.

The Minister for Agriculture said in a statement:

“The Government and I stand with our fishers and we continue to welcome all engagement with fishers, their representatives and with coastal communities, I welcome fisher representatives to the Department today to hear their concerns in person.” The statement also added that the Minister is pursuing “every opportunity” at EU level to increase the available quotas for Ireland’s fishing fleet.

Atlantis have been working with Irish skippers & boats for over 25 years, having developed long lasting relationships we call these people our friends and stand with them and support the Irish Fishing Industry. Our island country has some of the best quality seafood in the world, a modern fleet with knowledgeable skippers & crews, however they cannot continue with the current challenges and obstacles which may result in the loss of an Irish fishing industry for future generations to enjoy. We encourage everybody to support Irish boats by buying Wild Irish Seafood from your local fishmonger or fish counter.